Space, the final frontier. These are the voyages of the Starship Morning Wood. Its ongoing mission to explore strange new blogs, to seek out new lifeforms and new commentaries. To boldly go where no blogger has gone before.

Seriously. I am officially a trash picker. I opened up this post knowing with certainty that I had finished it last week. To my amazement only the above first sentences were here. Am I crazy? I remember writing this on a notepad last week when I was watching Undercovers. Afterward I created a new post and typed the whole thing out. Maybe I closed out the computer without saving the post. Only heaven knows!

Regardless, I found myself looking to find a balled up piece of paper in the bottom of the trash can and there it was with a couple of ideas for new posts as well. Thank goodness I’m lazy and that trashcan doesn’t get much use. 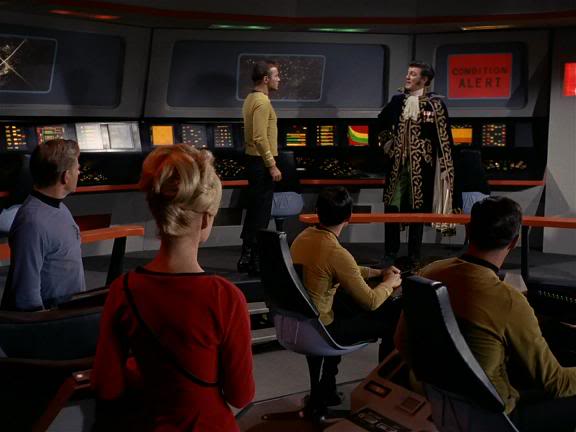 Unless Abrams is not telling the truth, Khan is out of the picture. I’m wondering who it might be because there are a great number to choose from. Will the person be a friend or foe? I have spoken with some folks at Lightspeed Productions and they tell me that in some of the art work they sell you can see what appears to be computer chips and processors. I was informed that it’s there because the Borg around in Kirk’s time.

I don’t want to see the Borg, the Talosians, the Klingon’s, Romulans or even Harry Mudd. What I did want was a Next Generation (before Generations) movie with Janeway, Sisko, Picard and Kirk all joined together to fight against some of the members of the Q Continuum. Since Kirk is both dead and in the Nexus I don’t see my dream movie coming to fruition.

To my surprise I learned in Star Trek lore, the Q Continuum was around in the original series. The Q in question (like what I did there), was Trelane. The character of Trelane from the episode, The Squire of Gothos is a young spoiled Q. That is who I would love to see in the next Star Trek movie. An even younger Trelane who  is even more childish and immature.

If you are a fan of the show or the movies do you have any suggestions for a traditional Star Trek character to appear in the movie? Perhaps a better question for me is when will they fix the time line to align with what we know Trek to be.

Skyline opens today. If you see it, let me know what you think of it.