I have a set posting schedule that I admit I don’t always live up to. Every two days you should be able to count on me for a new post. Sometimes I even post in between those days. This is the first time in the short history of my blog that I have thought something important enough to post twice in one day. I hope this doesn’t take any attention away from my first post today Carizza but… I actually feel like a real blogger. I heard a story on the news, I researched it further and got to writing to make what feels like the deadline for the morning edition. So it sounds corny. What can I say, it doesn’t take much to get me excited. That being said, read on.

Phillips Greaves is an author, an e-author. Recently he published and e-book that sold over 100 copies on Amazon.com. Pretty good for a self published author, I guess.

Amazon.com has recently stopped selling the e-book. The link is no longer available. Why would a business like Amazon pull a product and thus loos potential revenue related to the sale of said item? The reason is simple. Public outcry and Christmas shopping season!

What’s all the hubbub? Phillips Greaves, is the author of The Pedophile’s Guide to Love and Pleasure. Greaves claims not to be a pedophile and only wrote the book to make children safer. His e-book doesn’t promote the act of penetrative sex but does suggest that fondling is alright. Touching you niece or nephew because you love them and want to give them a hug is very different from stealing away somewhere and fondling their private parts.

Fondling is not alright and fondling is the word most often associated with sexual contact. Touching and fondling in today’s society are two words that no longer mean the same thing. Initially Amazon was not going to pull the book because they said it was censorship. Two anti Amazon Facebook pages later and thousands of complaints and even a boycott so close to the season of Christ, errr, I mean Commercialism, and now Amazon has changed its tune.

Amazon’s official policy states that pornography, offensive material and titles which may lead to illegal activity are prohibited. If that is their official policy then pulling a book off their inventory is not censorship at all, they are just adhering to their own policy. Makes you wonder if the sale of the book in the first place was allowed by someone who might be an advocate for the content of the book.

Amazon is not new to controversy but what company these days isn’t. In 2002 Amazon.com fought against the censorship of another pedophile book, Understanding Loved Boys and Boylovers (which is still for sale on Amazon). People simply should not be allowed to profit from the sale of items pro (some illegal act) in my opinion. I realize not everyone will agree with that and they will believe this is still censorship and both books and even worse should be allowed to be purchased. Maybe they should be allowed to be purchased, but it doesn’t mean businesses with a conscience should have to sell it.

Fret not though authors of trash like this. As society continues to degenerate pedophilia and even marriage between adults and children might become legal. Not in my lifetime I hope. Thank you Amazon.com for doing in my opinion the right thing, even though as I suspect, for the wrong reason. 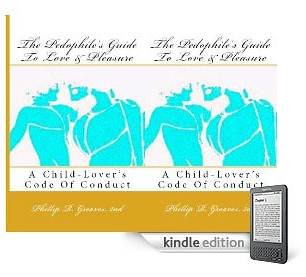